We cordially recommend you visiting the dam on foot from the center of Špindlerův Mlýn. The total length of the walk is about two hours (there and back). This walk is also suitable for baby buggy and small kids. Route towards this technical landmark and a tip for easy trip is described below.

The impulse for construction of this interesting structure were floods, which caused catastrophic damages at the end of 19th century, in the Krkonoše Mountains especially in 1897. The main purpose of this facility was to reduce the amount of flowing water and to protect the territory under the dam (hundred year flow reduced from 150 m3/s to 86.11 m3/s). Another purpose is a reduction of the Elbe River flow during snow melting period.

In 1910, Redlich and Berger, a Vienna-based company, started construction of Labská Dam with the budget of 3.5 million Austrian Crowns provided by the former Provincial Committee for River Management in the Czech Kingdom based on the project prepared by the Technical department for river management headed by Ing. Josef Plicka. Construction was finished in 1916. However, final inspection took place on October 18th, 1918. After putting into operation, seepages through the dam occurred that were getting more serious with time. A project for sealing the dam worked out in 1930s was not implemented due to unfavorable expert review. Sealing was carried out during the general repair of this water facility, which took place from 1966 until 1986. In addition to grouting, slide closures were replaced including drives as well as a number of other repairs.

In the middle of the dam collar, there are “RČ” initials as a symbol of the Czechoslovak Republic instead of the original initials of the emperor Franz Joseph I of Austria, which were adapted to the current form in 1926 (the original two-headed Austrian eagle was covered by concrete in 1920).

Statistical data:
from 2006 until 2007 the dam undergone another reconstruction. Repair of the dam crest contributed to the perfection of the structure.
The dam is located at the altitude of 694.16 meters above sea level. It is founded on orthogneisses in the depth of 4–7 m under the terrain level. The spillway on the right bank and cascades are founded up to 16 meters under the terrain level. The abutment block of the Intzet type with embankment is constructed using local gneiss on a trass cement mortar. The maximum height of the dam crest above the foundation joint is 41.5 meters. The length of the dam crest is 153.5 meters and the width is 6.15 meters. The total volume of the dam is 3.292 million m3 of water and the maximum drowned area is 26.78 hectares. The average long-term annual flow is 2.14 m3/s. Q100 (100 year water) equals to 175 m3/s.

Technical data:
Water is released from the dam through the left base outlet (right outlet is closed with concrete on the inlet) with the diameter of 1,100 mm and capacity of 11.6 m3/s. In addition to this, there are five outlets leading into the bypass tunnel with the diameter of 1,000 mm and the total capacity of 89.9 m3/s. In 1998, all closures were repaired and the control system and drives were replaced. The bypass tunnel is one of the major operating systems of this water facility. The total length of the tunnel is 149.35 meters and the shoe profile dimensions are 7,000 x 7,000 mm. The tunnel is driven in a solid rock. Only a short section at the portal is lined with gneiss stone. The safety system for conveying excessive water is a crest and shaft spillway. The crest spillway is situated at the right side of the dam. Crest of the spillway is lined with granite blocks. The four spillway fields have a clear width of 9.90 meters on the level of the spillway edge.

The capacity of all fields is 74.12 m3/s. The shaft spillway situated at the left bank of the dam behind the dam keeper’s house is made of the quarry stone. Inside diameter at the level of the spillway edge is 11,500 mm. It is fitted with a rack wall and a service gangway. The round vertical drainage shaft has a diameter of 5,000 mm and it runs into the bypass tunnel. The capacity of the shaft spillway is 79.37 m3/1. Two limnigraphic stations are used to monitor flows above and under the dam. Both stations are included into the network of the Czech Hydrometeorological Institute with a local registration.

From 1999, the stations transfer data into the control system of water facilities and the Water management control center of the Elbe Basin in the city of Hradec Králové. Water level gauge is used to monitor the water level in the dam. It is located at the intake crest of the dam at its left bank. In addition, limnigraph with the local registration is installed in the slide shaft as well as the pressure probe, which transfers data into the control center of the water facility. To provide operating forecasts of the inflow development, six automatic rainfall and temperature measuring stations were established in 1999 (Medvědín, Labská Hut, Špindlerovka, Luční Hut, Pláně, and the dam) with the automatic transfer of data into the control system of the water facility. 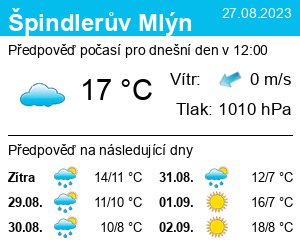